Include everyone in the strategy process

Today the topic is how to get everyone to join the strategy process. It has been almost impossible to include everyone in the old world, because it has been too expensive, too slow and time consuming. Now it’s possible thanks to technology. 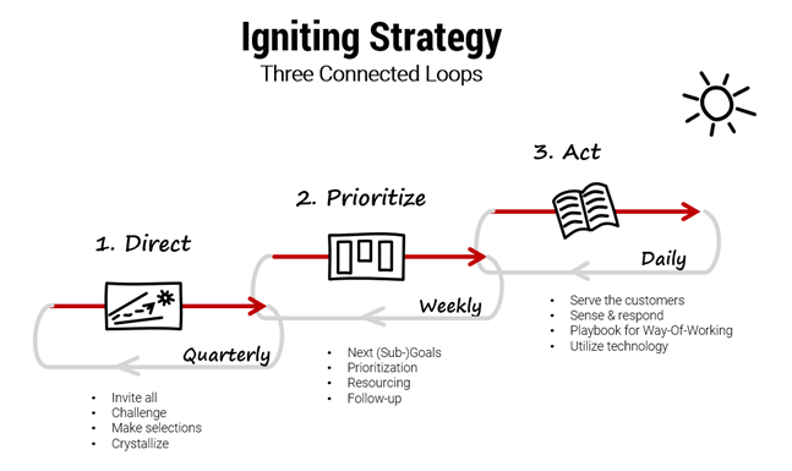 Last time I introduced the Strategy Journey and how a strategy is ignited. This model above has been of great help to me because it clarifies how to update a strategy in a new way.

Strategy shouldn’t be a yearly cycle. It has three loops that rotate non-stop. We have the Act phase that rotates in every business, but we also need to lead and steer the strategy. It’s not just the leader that leads, everyone leads themselves in this process.

Then we have the Direct phase, where the strategy is decided. This is often called a strategy process, but the implementation phases, which are the second and third phases, also must be included. It is not so that we make a strategy and that’s that. We also need to implement it. 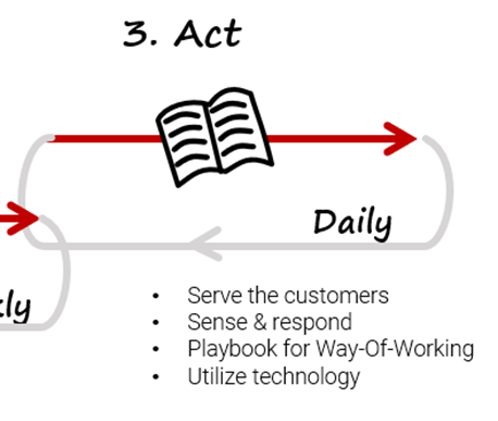 Let’s begin with the third phase. This is where we help our customers and take them on a journey – we call it the Customer Journey. One must renew one’s working methods to be able to help and react to a customer’s needs even better. Some working methods become obsolete because today technology helps us to do the job more effectively. We should take advantage of technology! 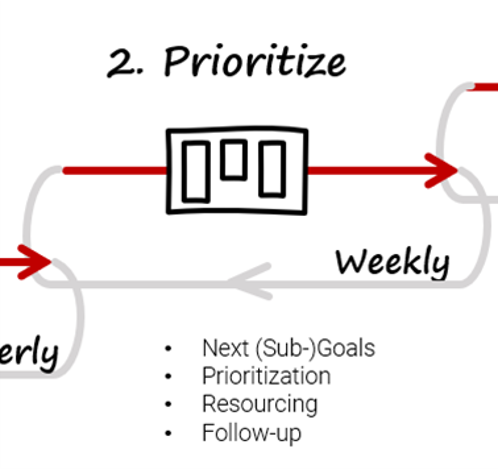 If we look at phase two, it has to rotate weekly as the previous one rotates daily. We must prioritize our work constantly while also taking the strategy into consideration. At the end of the day this a great talent, that is also difficult to master. If one tries to do too much, everything is delayed. People ask for more resources, and that is a sign of bad leadership.

According to some, all problems are leadership problems. Everyone has their hands full. The leader is bad, that doesn’t fill the days of their employees. Of course, we must give everyone as much work as they can take, but if they don’t have the time to do the most important thing, that’s bad. The skill of resourcing means that we must guide, follow, and lead ourselves. Prioritizing must be done constantly. 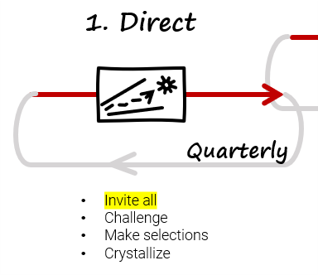 The directing phase is where the strategy is made. In the end, strategy is a sector in which we sail every day depending on where the wind blows. The ‘Direct’ loop must rotate quarterly.

The topic I’m addressing today is to invite everyone to participate through technology. Why so?
Because that is how implementation takes place, almost like it happens by itself. At this point people challenge themselves, make big decisions, and compress it all into a strategy 1pager.

As I’m writing this, I’m in the middle of a process, where in the first workshop we got 3129 written suggestions from the staff. 3129! That’s an amazing amount! Those suggestions need to be gathered, prioritized, and compressed.
My own definition of strategy is simply: How do we proceed into the future? 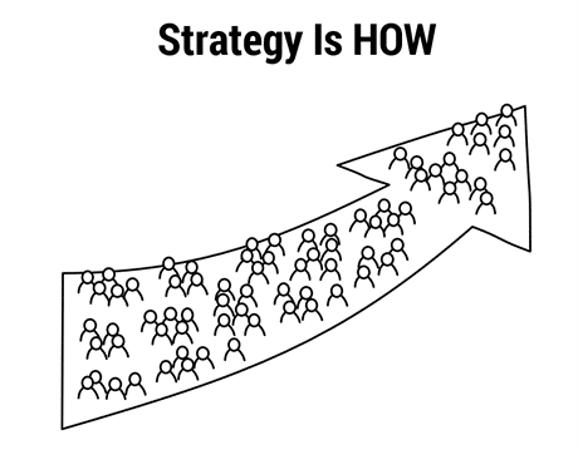 The above image is the ideal picture with the board and the management included. The strategy always somewhat changes when we renew it. Otherwise, there’s no point in doing the whole thing if we continue business as usual. In the ideal world people obey and immediately go in the same direction. Often the reality is, however, that they don’t go in the same direction but continue with inertia as before. 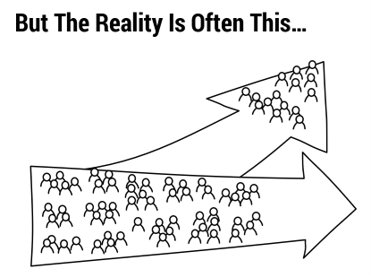 In this picture the board and management “workshop” a lot and they are excited that the challenging task is finally complete. Then a big meeting is held, and the strategy is explained to the staff, who seem very interested. The staff isn’t being mean if they keep going straight as before, but somehow, they don’t understand what the high-quality ideas in the strategy mean in their work.

If there weren’t high quality thoughts and one wouldn’t rise high up to look around, one wouldn’t see how everything works. Herein lies a gap, and we must close it.

During the five-day war in Kuwait, general Schwarzkopf gave a press conference every day. He said, if you’re down at where the sand dunes are and see the enemy, you can easily make good decisions. But, if you rise to the satellite orbit, then you know what to do on a grander scale. If you see fifty tanks approaching you know exactly what to do.

We need both: The head in the clouds, but with really long legs firmly on the ground. One must know how to think with high quality and then you need really long legs. That has been my motto for a long time. Think high quality thoughts, which business are we truly focusing on? 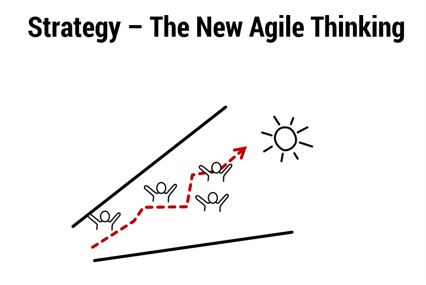 When everyone is included in the strategy work, the strategy becomes agile. The owners define the sector in which the staff works. The owners have a right to say where they invest their money. They recruit others to further their business, and people want to join in, because the business purpose towards the clients is so fine. The sun symbolizes the business purpose.

If you include everyone from the start, they understand everything more profoundly. It is in fact very affordable and cost-effective for everyone to take part in an online meeting. If you create a strategy inside a standard face-to-face conference room and then try to get people to commit to the strategy, they have great difficulties understanding what the strategy means for them in practice. Involve and include them all from the start!
I’ll tell you how it’s done. 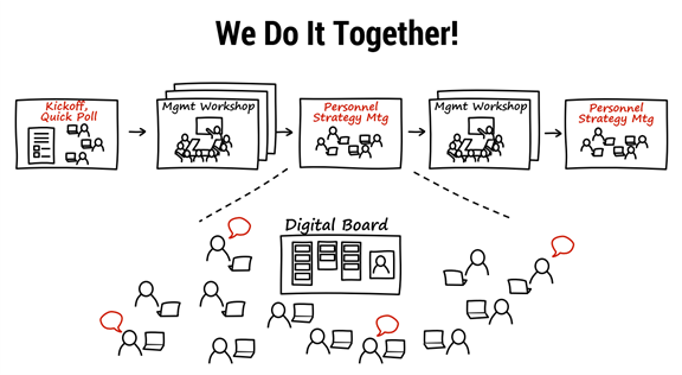 This is the principal model we have used for many years. At the moment I’m in my 93rd strategic process and this is exactly what we do. Meetings, in which the staff is included are marked red. The kick-off is just an hour-long meeting. During the kick-off we ask people to write comments and to vote on a digital board. Recently we got hundreds of comments! We use an affordable software that even makes it possible to take part through your phone.

We asked the kickoff participants: How do we grow faster? What doesn’t work?
We immediately got a lot of comments. After the kick-off we held workshops in smaller groups. Everyone who wanted to take part in them, was allowed to take part! I have also been in projects where the whole staff was included in the workshops. In these cases, the companies are smaller, perhaps 50 employees. In a bigger company with a thousand (or more!) employees, it’s impossible to include everyone in every single workshop. That’s why we ask for volunteers that are interested in joining. The fact that one asks is in itself a pretty big deal. Those who are passionate will join.
After the first workshops a check-up meeting held with the whole staff. A half-finished strategy is presented to the staff and they give their opinions. We ask:
“Are we going in the right direction?”

WHAT?! An unfinished strategy is shown to the staff? That’s unheard of!
I get that this is a pretty dramatic idea in the old world. For many leaders it can feel embarrassing. A leader with a poor ego doesn’t want to show anything that’s not finished. To them it has to be refined and exquisite. In the new world a leader’s ego endures with the thought that “I’m only human and also capable of making mistakes. These are our ideas, how do you think we could improve?”.
In every meeting we have a digital board to write our agenda and tasks on. The advantage is that everyone can write on the board at the same time. You don’t need to screenshare PowerPoint and then ask people to discuss. By sharing a PowerPoint slide a few steal all the airtime and there are many silent introverts that might have the greatest idea of all participants. Everyone else might agree that the emperor has fine new clothes, but that one quiet person says that our catch isn’t good at all!

When you make everyone write, even the introverts get a chance in participating and all of this can happen simultaneously. In two minutes we can get hundreds of comments. Amazing! Those comments take us forward.

When you make big decisions, for example, that you will shut down a business unit, the decision is made with a small group.
In the end the strategy, that is just about ready, is brought to the staff. Is it now as it should be, or does something still need to be tweaked? That’s how one takes things forward and it’s a fantastic process!

We had a process with a company with 50 people. With the whole staff we finished the whole process in just three weeks! The CEO of the company hadn’t in his wildest dreams thought that it’s even possible. Plus, many big decisions were made that weren’t clear to the management before the process started. The picture only got brighter.

Let’s do things authentically together by inviting everyone along for the journey. The meeting has to be online, otherwise it won’t succeed. In an online meeting everyone must be in their own rooms. Not so that a few are together in a conference room. All have to be in separate rooms. If some are in a conference room they converse with each other and not through the meeting media, like the call software. This causes conversations to stays undocumented. In such a situation we also can’t divide people that easily into groups. Everyone sits in their own room, that’s how you roll!

As I’m writing this it has been four years since I began holding online meetings.

One could say that we have all passed the fourth grade: People know how to use computers, and in that sense, they have done a personal digital leap. Recent events have forced people to graduate to the fifth grade, when online meetings and seeing one’s colleagues through video became the norm. In the fifth grade, however, people don’t realize that it’s not just about sharing one’s screen and conversing one at a time.

The sixth grade includes having a digital board, which everyone can write on simultaneously. That’s a big productivity leap. That’s the next collective digital leap. In Finland we have begun to understand this and it’s great that it’s happening now. We have worked in this manner since 2016.