What kind of strategy process?

We can use a variety of strategy processes. Today I’ll explain a process that is strongly involving. It all starts with a preparation phase, which is often over in 30 seconds. The leader decides who all are involved and how many meetings are held. After that the preparation phase is over.

Things can be done much better during this phase, which is why I’m introducing you to my very own pride, the hamburger model.

How does one go top-down and bottom-up at the same time? 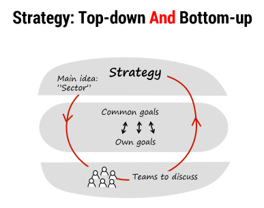 Go top-down and bottom-up side by side. This forms a hamburger, where the outcome becomes the patty in the middle. 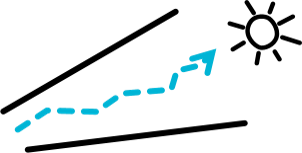 The management can start from the top, while creating the catch. I often use a sector model for this. The management defines the sector in which we want to operate. The cornerstones can be at the end of the lines. In this sector we decide what we want to do to get more growth, profitability, excitement and energy eruptions.

At the same time the ball is thrown to the organization by asking it for insights. Involving others can easily trigger anxiety in a traditional management and board. They think that others aren’t capable of understanding anything else but operative everyday situations and that it’s the leader that must think about the future.

This, however, isn’t true because there are many that understand the future very well.

Once the group has gone through the strategy, the ball comes back up. Then the big choices, and focus areas, and their breakthrough goals, are decided.

The hamburger model is approached from two directions. One doesn’t need to do just the other, because the result is much better when using both. 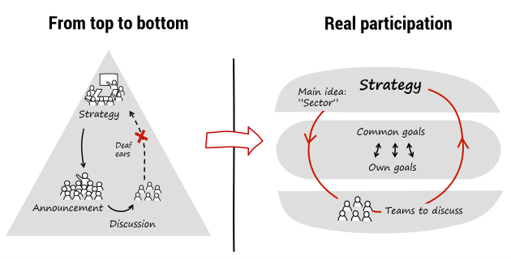 In my opinion, the picture on the left is horrible in a sense. This is the traditional top-bottom model, which basically means that wisdom sits at the top of the ivory tower. The top-floor people sit down for many workshops. The board gives the opening speech, and the management group is put to work. In the end, when the white smoke has appeared out of the chimney a briefing is held.

The “town hall meeting” is an hour or two long, where people are invited as auditors. The CEO gives a presentation, and the management is very excited to have finally finished the strategy. The CEO shows everyone their exciting ideas and the people are puzzled at what this all means to them.

Next comes the Q&A moment, where someone always raises their hand and asks:

“What does this mean in practice?”

Of course, the CEO tries to give an example, but silently in their mind they are thinking:

“Do I need to do your job for you? I’m paying you a lot of money so that you can figure out what this means in practice. I can’t do everyone’s job for them”.

… But of course, they can’t say that. Instead, they figure out an example.

I once bumped into a board member that ran a strategy process in a big organization. He used the word ‘keskusteluttaminen’ in Finnish, which freely translates to “forcing people to converse”. This word is the worst thing I’ve heard after headquarters, subordinate, the head, and other ancient terms.

Think, if someone today would re-launch the word ‘foreman’. Whoever thought of the word would be lynched for its misogynistic and discriminating nature. The word for “forcing people to converse” is worse, because it’s the same as saying “Converse you idiots now, so that you understand the point of this”.

During this specific case when extremely qualified people conversed and they took their feedback upstairs, the message fell on deaf ears and wasn’t paid attention to. They gave heavy feedback. They said they wouldn’t see a difference, if they kept doing things the same way. They seem just the same as any business. The people upstairs didn’t pay any heed to this.

Listen, people. The traditional way is not only terrible, it’s also a bad system that won’t lead to good implementation. The implementation becomes bad and people won’t join in the journey. The management has to sell an idea and to use a lot of time, money, and effort to get the organization onboard.

NO, NO, NO! This is why one should move to authentic participation.

How do we get the feeling we’re authentically taking part in the strategic process? That’s when we realise there’s no need for a separate implementation process!

In a world where we go from top to bottom and bottom-up, there is no separate implementation process. It has happened already. You start to do things with excitement! We have to get into a world like this. The reason is strictly economic, because the authentic participation model creates much more results and value for the business owner than the top-down model. It’s in a different league. Everyone wins: the customers, staff, business owners, the government…

I like to say that nothing is as strong of a force as a hundred people going in the same direction. It produces a magnificent power instead of all of them going in different directions and doing their own things.

One must build the hamburger model top-down and bottom-up and get the operation in the middle as a patty. 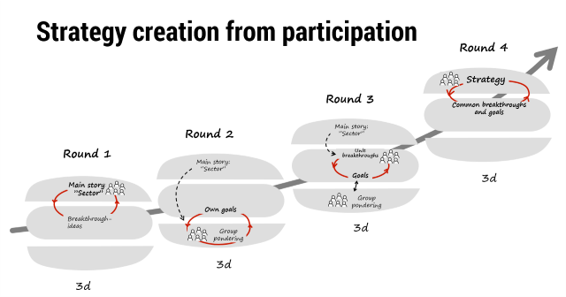 Let’s see how it’s done. I have visualized a hamburger model, where progress takes place over iterative rounds.

Round 1. Leaders define the frames, the sector. The board looks at strategic key questions, to which they want an answer from the organization. Then the ball is thrown into the second round. The staff is asked for their opinion and they are presented with central questions, as well as the frames in which the business wishes to operate.

Round 2. A business owner has a right to decide where they invest their money. This is how the frames are formed. Then, people begin to think, and this produces a great amount of comments. One challenge at this stage is how these comments are collected and refined. The hamburger patty needs to be found.

Thankfully, technology has brought many efficient methods to help. With digital technology it’s possible to collect everyone’s opinions efficiently and to refine them further. In a big organization it takes a week or two, and after that we move to round 3, which is the “patty level”.

Round 3. Let’s combine our thoughts. What is our focus? Many goals are defined and are combined into focus areas. It can be that the big focus areas have already been defined at the beginning of the collective strategy journey. Alternatively, it can be that those decisions haven’t been made yet. Throw the ball to the staff and ask what they think should be focused on. It’s amazing how high-quality the answers are.

Round 4. Now the ball returns upstairs. There the suggested ‘patty’ is examined if it’s good or not. My opinion is that if many big breakthrough ideas have been crystallized at the beginning of the strategic journey, they tend to change towards the end. People have gotten wiser as their ideas have iterated during the journey.

Strategies cast in stone are dead, in my opinion. No more three to five-year strategies, one must proceed with an agile way of thinking.

Strategic season. Actually, the term strategic season is an old-world thing because no-one can plan or predict the future. There is only intuition and guesses. With the help of the past one can measure statistics and ask oneself if the numbers are going up or down.

However, surprises arise. That’s why it’s better to update the strategy more or less constantly, maybe every 3-6 months. It doesn’t mean that the big things change all the time, but some projects are completed as others need to be updated. That’s why the strategy should be looked at quarterly.

Iteration! The whole point is this being an iterative process. The strategy ripens version by version, and just as in a micro-enterprise or a billion-dollar company the strategy is crystallized and compressed onto a Strategy 1Pager.

Even for a micro-enterprise consisting of a few people, it’s useful to think about the choices that take them further. It happens intuitively between the ears, when in bigger companies it happens through these iterative rounds.

The common factor is in producing a one-page map. Once you accomplish that you have also made your choices. I call this the Strategy 1Pager. If you refine it, miracles will happen. Especially when the whole staff has been involved in building it from the start. It’s in a completely different league compared to doing things the old way. The old way is slower: You make less money, people are less happy, energy erupts less, you don’t become successful.

This is how a strategy is ignited! I highly recommend you take the hamburger model into practice. Do top-down and bottom-up at the same time. That’s how you find a juicy patty to go between the buns.